October 18, 2014
Brussels, capital of Belgium. This often overlooked destination, situated just between its more popular cousins Amsterdam and Paris, is where I find myself on my wandering beer journey. The de facto capital city of the EU has quite an underrated amount to offer in terms of culture and variety, not to mention some of the world's most excellent beer cafes and historical breweries, hence it's no accident that I find myself trekking here.

Brussels is also the capitol of Lambics, the only beer in the world still fermented by wild yeast and bacteria, and until the mid-19th century was the only type of beer that you would find made here, being home to at least 100 producers at its peak.

Lambic beer has been produced since the 16th century and quite differently from that of your typical beer. While most beer in this day and age is fermented from specialized strains of brewing yeast that's added to the wort after brewing, Lambic beer ferments from wild airborne yeast and bacteria from the brewery itself. Lambic brewers pump the wort onto a wide, flat copper pool called a Koelschip, where it literally sits and collects enough dust to ferment the sugary wort into alcohol. After undergoing a spontaneous fermentation, the beer is pumped into oak barrels to sit and age anywhere from two to three years. The end result is a beer that is very difficult for an amateur like me to describe, but that wont stop me from trying. 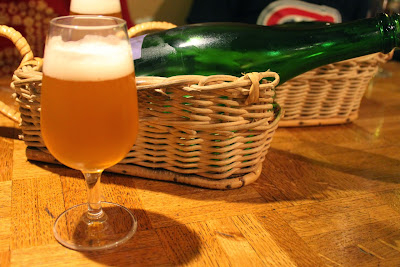 Today there's just a handful of brewers that preserve this unique style of brewing, making finding an active craft Lambic brewer akin to that of unicorn spotting. Luckily for me, the one that I'm visiting is published on Google maps.

Nestled in the middle of a derelict residential neighborhood of south Brussels is a Lambic brewery by the name of Brasserie Cantillon. This beer nerd's Mecca has been open since 1900 and outputs 1,700 hectoliters of beer annually (For comparison, Sierra Nevada output 922,353 hectoliters in 2010).

After much map consultation I eventually stumble upon the front doors of this inconspicuous little brewery. 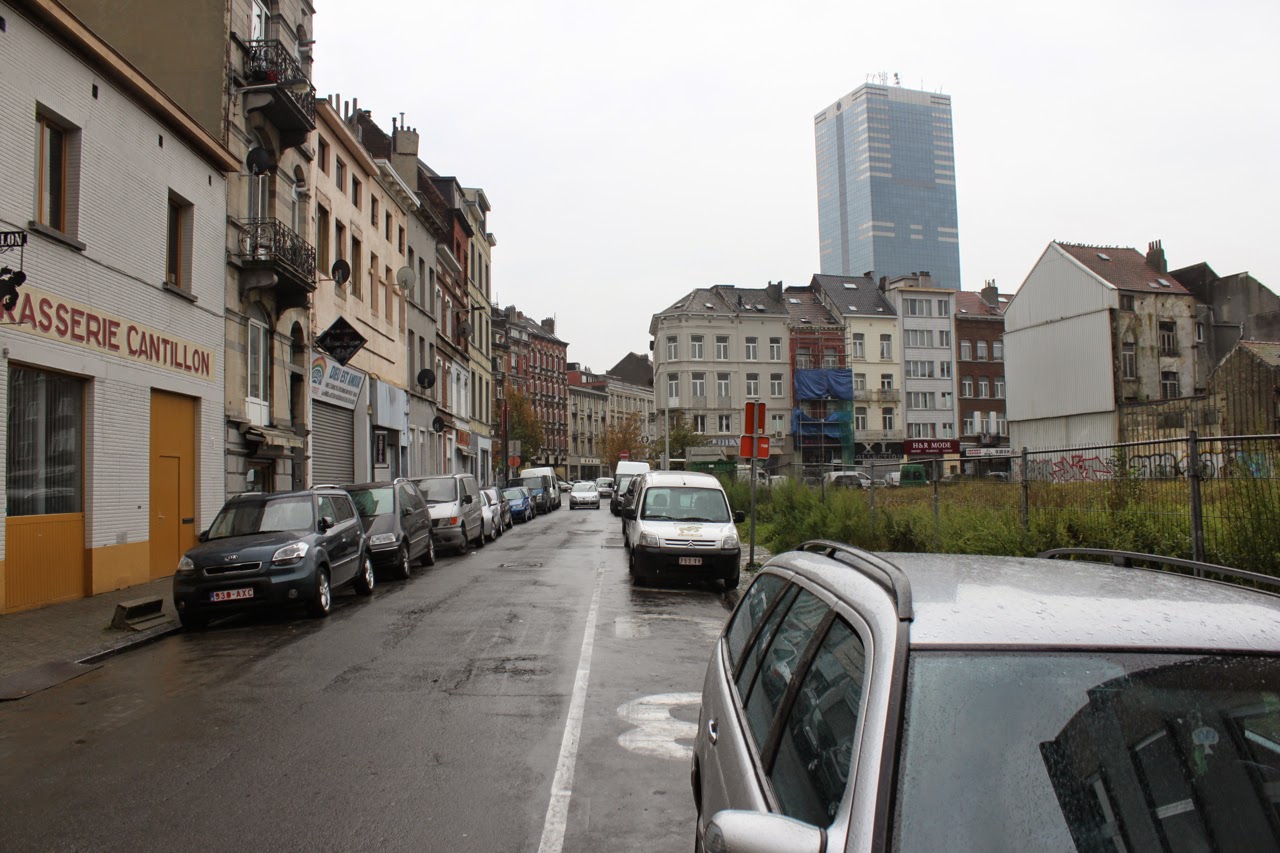 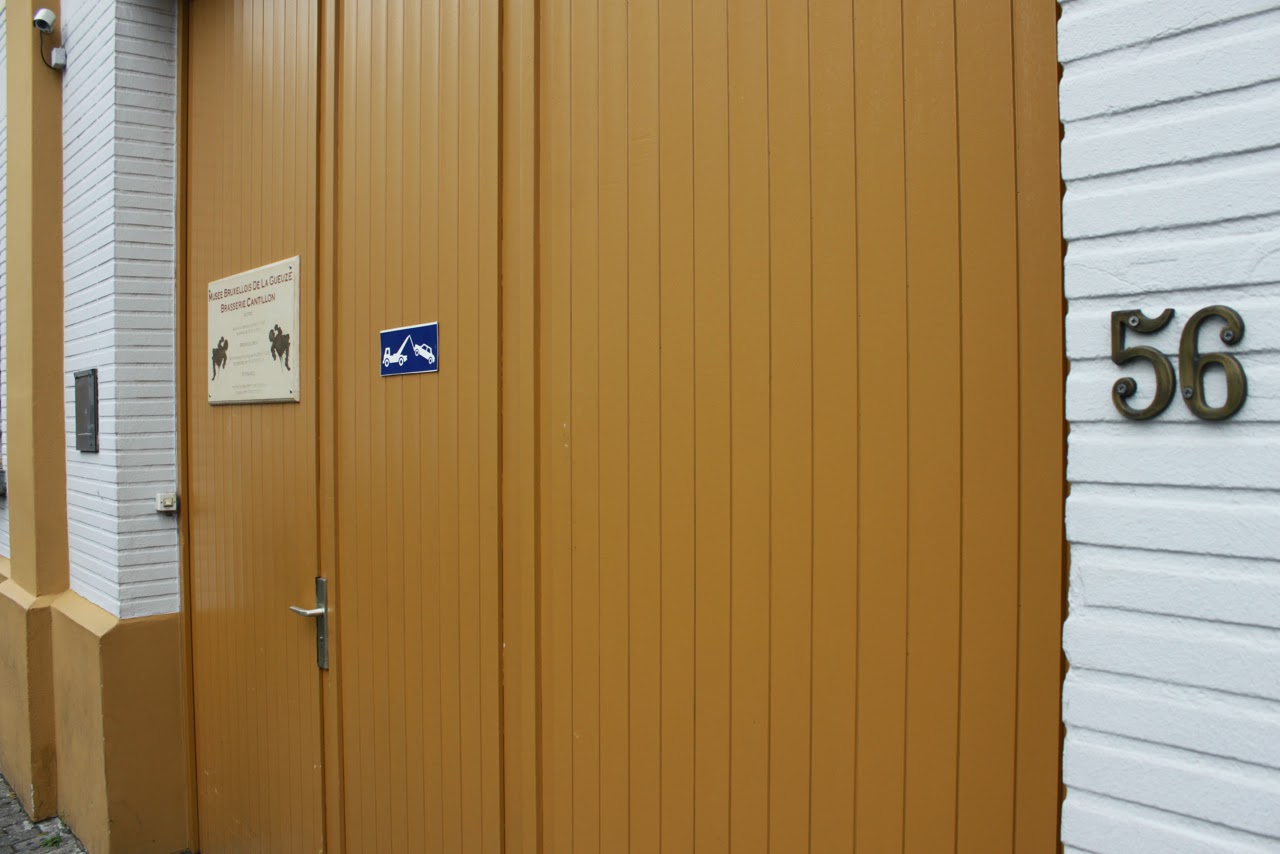 I pull open the massive wooden door and step out of the barren, rainy streets of south Brussels and into the warm, hospitable, jolly atmosphere of an active brewery, tasting room and accredited museum. The first thing I do is step around a fork lift loaded with a pallet of shrink-wrapped beer bottles, stroll by a very inviting tasting counter, and finally approach the shop counter. Immediately, a weary traveler transforms into an happy, eager kid.

The tour is completely self-guided and allows you to walk unrestricted around almost the entire brew house. While there was no brewing on this specific day, the employee working the bottling line was very nice to not curse me aloud while I shuffled around him to snap pictures of his work.


In another corner there was some employee bustle around the area of what looked like Cantillon's original beer filter system. Not too far from this were some stainless steel vessels sitting amongst a deep red liquid spilled on the floor. I suspect some Kriek was being produced via the addition of fresh Morello cherries around the time of my visit.

The brewery has the typical production and brewing equipment, but what is especially interesting (and completely unique from almost all other brew houses) about Cantillon was the koelschip and barrel room. The koelschip looked as if it were crammed into the tiny attic space above the brewery itself, where the beer collects its difficult to control, batch-unique wild yeast from the air.


Tucked away in the dark, damp second floor is the barrel room, which houses the large oak barrels where the beer is aged and conditioned over the course of several years. This is where the beer passes through many stages of complexity and truly becomes a one-of-a-kind species.

The amount of cob webs on, around, above and below these barrels not only signifies how long the beer has been resting dormant, but also are a deliberate protective barrier against pest insects, since use of insecticides is strictly barred for fear of altering taste. As a visitor, breaking these webs or killing spiders in the beer house is extremely frowned upon. The brewers and their eight-legged friends have a nicely balanced partnership at Cantillon, don't mess with it.

Before I describe my tasting here I must make a confession. I'm by no account qualified to write about the beer experience detailed here. Some people spend decades of their adult life building taste buds in order to properly dissect a complex beer ingredient by ingredient. Some of these people go to great lengths to become certified, distinguished tasters, able to boast their appreciation of every drop of beer known to man.

I’m not one of those people. Nor do I wish to be. In typical style I just plunged headfirst without much preparation or knowing what to expect. I just simply tried to forget everything I had ever thought I knew about beer and walked blindfolded into the fascinating world of Lambic beers, and it was amazing.

Here are a few snaps of 2+ year old fruits of a distinctive, time-honored brewing process.

These special beers are as rich with character as they are with pride, and require as much time and patience to appreciate as they do to produce. That being said, Lambics aren't for every beer drinker out there, and with the exception of Kriek, myself included.

My taste buds could not fully comprehend what I washing over them, at least not enough for me to begin to describe the way the beer tastes without using dull adjectives like "sour" and "spicy". Instead I would refer you go and try one to experience for yourself.

Cantillon is as pure "craft" as a craft brewery can possibly be, I absolutely enjoyed my visit here. Thank you again for reading!
beer