Why I Let My CCIE Lapse 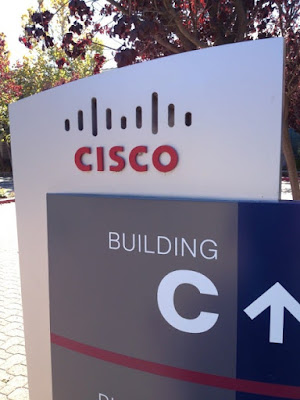 Like many of us in the networking field, my earliest career dream was to join the coveted CCIE (Cisco Certified Internetwork Expert) club. In fact one of the most time-consuming things that I've ever done was invest myself into building and working through my home lab rack over, and over...and over again to eventually go and pass this one-of-a-kind exam to earn my place and certificate number. That hard work turned out to be great fun, and in reminiscing about my trips to San Jose to sit for hours in Cisco's infamous 'Building C', it even had a romantic quality.

These days though I must admit that I've become rather disenchanted with the program. Please don't misunderstand me; I certainly still respect it and those who are part of its iconic history, but with the explosion of vendor competition in the networking world and with so many new technologies and architectures to absorb (cloud platforms, network virtualization, programming, automation and so on) I've realized that the CCIE certification just isn't as crucially aligned with my career goals like it was ten+ years ago when I first started down that path.

It's for that reason that when the dreaded six month re-certification reminder hit my inbox I had a choice. I could either drop what I was doing and spend the next two or three months studying to re-certify the miserable written exam again and buy myself another 2 years for something I don't directly practice anymore OR I could instead continue down the enjoyable path I was on: designing cloud architectures (with and without Cisco solutions), learning multiple programming languages and automation frameworks, and focusing on the ever-more valuable AWS certifications suite.

It isn't surprising to you at this point that, amid the shock to my colleagues, I chose the latter. I felt that it was necessary so not to become a dinosaur in my profession and to keep myself modern enough to be desirable in today's engineering job market. 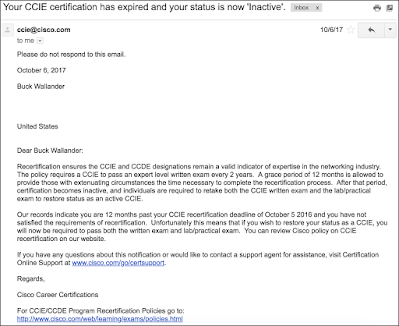 I think it's also fair to say that the network industry's consensus is that the CCIE program isn't what it used to be...nor are the certificate holders themselves (myself included, I never felt as though I deserved the status). After all, this was a test created to recognize the most experienced, seasoned professionals after they'd spent a decade or more in the field. Now, it's transitioned to be more of a starting point for the eager and ambitious. A CCIE certification was once a prestigious award to recognize one's very distinguished career and knowledge. Now, a CCIE has become an enabler to jump-start one's career early on.

Will I ever revive now expired CCIE #27123? We'll see. I can say that while I do despise any Cisco "written" computer exam, I did genuinely and thoroughly enjoy sitting the actual lab in building C on Tasman Drive. Perhaps this was all to force myself to go do it again one day. For time being though, I already have a sizeable list of career goals where I feel I need to commit my time, and the CCIE isn't on it.

Are you a CCIE or expired CCIE? What are your thoughts about the current state of the program?
CCIE